Seattle's bull-dyke mayor---with her manhood constantly being questioned by President Trump---finally moved today to suppress the Soviet Republic known variously as Chaz or Chop. The Commune unilaterally declared its independence from the United States on June 9th and carried out a three-week Reign of Terror in which violent crimes exceeded all of 2019's annual numbers. Yesterday, crews from SDOT broke down the concrete border-walls and today at dawn SWAT stormed and retook the abandoned police precinct building.

Earlier in June, peaceful protesters howling over the death of George-Whats-His-Name menaced the Capitol Hill police precinct, and the SPD ran away screaming down the sidewalk. Thus an entire neighborhood was left defenseless until today. The SWAT team met with little resistance, save for one Anarcho-tard who attacked them with a home-made pike. So far, 32 of the Insurgents have been captured---hopefully to face Federal charges. There's been no word as of this writing on the whereabouts of former Chazian President Solomon Simone. 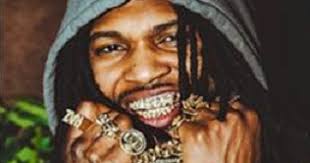 Simone is no stranger to jail cells himself---with a lengthy arrest record for narcotics, weapons, child endangerment, driving with suspended licenses, carrying fake ID papers, etc. It really ought to cause us to pause and reflect that Solomon Simone is what the Whacko Left prefers in a leader over President Trump. Let that thought sink in.

Within the next few days, hopefully, Simone's next leadership position will be on a chain-gang on its way to clean up all the garbage and graffiti he and his followers spread through the Capitol Hill neighborhood.  I suppose that another lesson here is that standing up to bullies actually works---even when Liberals do it. If the Seattle Police---the weakest, most impotent law enforcement agency of any major American city---can do it, anybody can. 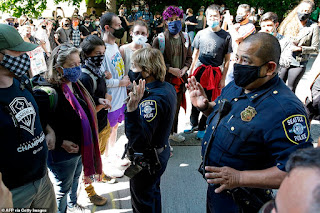 As might be expected, the Media rats are in a state of mourning. They had been portraying the Commune as a Summer of Love and a Great Social Experiment. But Chazimbabwe crashed and burned like every other Communist state. While it's true that Washington State's and the City of Seattle's leadership has been highly complicit in the 2020 Coup, the existence of this social blot within their jurisdiction was undermining their own cause. To the Red mindset anything that impedes the progress of the Revolution automatically becomes expendable---and that's what happened to the Chazimbabwean 'experiment'. All of these young Marxists who supported the Commune should have read a little movement's history. If they had, they would have found out the Left has no more compunction about sacrificing its own members than it has about liquidating its perceived enemies. Just ask Leon Trotsky.

In fact, Mayor Durkan has fallen out with Bolshevik City Councilwoman Kshama Sawant. Sawant is really more of an obnoxious pest than an actual political force in Seattle, but she has a large cult following among the Seattle Left because of her unapologetic Communism. In a prepared statement, Durkan accused Sawant of doing the following things during this Summer's riots:

All of which are true, by the way. Sawant responded by writing: "In reality, this is an attack on working people’s movements, and everything we are fighting for, by a corporate politician desperately looking to distract from her failures of leadership and politically bankrupt administration." Which is also true. Durkan is the daughter of a very corrupt State politician who became an even more corrupt lobbyist. Her brother was an adviser to former Seattle Mayor Greg Nickles who was largely loathed for his habit of awarding fat government contracts to his Corporate cronies instead of local businesses. Her own mayoral campaign was heavily backed by Corporate interests.

Durkan also has that peculiar lesbian proclivity for bullying and violent conduct towards other women. According to Wikipedia:  "In April 2019, two of Durkan's staffers accused her of mistreatment and called the working environment 'toxic'. One alleged that Durkan had 'grabbed her face and forcibly turned her head' when the employee was making suggestions on how to handle the anniversary of the death of community leader Donnie Chin. The other described a hostile work environment where she was 'set up to fail' despite having a good track record at previous jobs, and wanted $1.6 million in lost wages and emotional distress. Both employees were Asian women, a fact the second employee pointed out. Durkan's office denied both employees' allegations."

Sawant is so far to the Left politically that even the Democrat Party fringe distances itself from some of her kooky proposals and really weird behavior. During the Democratic Party primaries, she wrote the following to Alexandria Ocasio-Cortez: “Finally, we must recognize that while we agree on many things there is a fundamental difference between Marxism and social democratic politics. Socialist Alternative and I are fighting for a socialist world and recognize capitalism cannot be made to work for the working class. Social democrats hope to create a humane capitalism – a futile mission and fundamental error. We also believe we need a new party for working people, independent of corporate money and the ruling class and we do not agree with your decisions to run as a Democrat.”

But strangest of all was the recent revelation that the Durkan Administration had only seven months ago awarded then-future Chazian President Solomon Simone with an $84,000 City grant to build a recording studio. This relationship between Simone and the City has not been fully explained, though it may explain in large part why the City has brought no charges (yet) against him despite his leading of a Secessionist plot. Simone is not exactly the impoverished child of the ghetto that he makes himself out to be. It's also quite suspicious that in all of the crimes Simone has been arrested for committing, he's never been sentenced to serve time for a single one of them.

Vlogger Davey Crocko recently exposed Simone's connections to high-level executives within the music industry. As Crocko pointed out, it's very shady that a rather mediocre rap musician from Gig Harbor, Washington suddenly hobnobs with these rather powerful Hollywood figures. As any Californian with even a modest degree of awareness knows, Hollywood is barely one step removed from an organized crime syndicate in its own right.

I hope that Seattle's media digs into the connection between Durkan, Sawant, and Simone because there's obviously something fishy about this whole drama of the Chaz Commune's rise and fall. Better still, I hope that Attorney-General Barr warms up the DOJ Steamroller and heads it off in the direction of the Emerald City. A Swamp-Draining in that city is long overdue.