THE NEW WAVE OF TERROR

It's difficult to imagine that only two Summers ago, America was on track to being Made Great Again. The economy was moving faster than it had in over 20 years; jobs were coming back from foreign outsourcing. We were on track to Energy Independence again by 2025. Bureaucratic overreach was being scaled back; the Opioid Crisis was being reversed; gangs broken up, the Government investing in infrastructure, research and development again. Americans could put up religious displays again without fear of persecution---we were generally looking forward to 2020 and second Trump term tackling school choice, expanding infrastructure reform, and curbing price inflation.

Then one day, a bunch of assholes showed up with a blueprint to 'reset' us back to Deep State times. Playing off of Americans' love for LARPing and Real-Time Soap Operas, they turned a Chinese lab leak into a national meltdown and employed it as cover for a Color Revolution. As usual, Americans acted first, and thought later; throwing all the gains of the previous three years away and many of our remaining Civil Liberties along with them. Along the way, a few of the realists even saw a golden opportunity to cash in on the panic, and some small fortunes were made. The Elites couldn't take our freedoms fast enough to keep up with the hysteria; and so when they finally overthrew the Government, they have been trying to catch up with the public ever since.

Today, following some recent threats from the degenerate Dr. Fauci, the Regime's Ministry of Health announced new orders 'recommendations' to bring back the Mandatory Mask. And right on cue, the Corporate Media suddenly produced a flurry of articles with the usual COVID hysteria; a 'surge' and 'record numbers of cases' being the most common propaganda-points I'm seeing in the news feed.

The Ameroboobs of course are already buying into it wholesale---just like they do any 'emergency' that feeds into their hunger for drama. I doubt there will be any resistance this time---probably even more compliance. The American male has sunk to the level where the State could probably order him to wear a mask but stop wearing pants; and tomorrow we'd see 4/5 of our men in public in just their underwear. 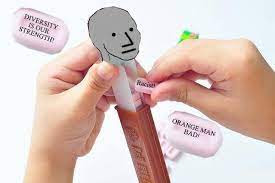 Unsurprisingly, the 'surge' is supposedly happening in predominantly Conservative regions. Like last Summer, when the 'pandemic' suddenly went dormant wherever Antifa and BLM were rioting, it's now supposedly come back hardest among populations of those who doubt the vaccine. The transparency behind this latest fraud ought to be obvious. The Junta's masters in Big Pharma and the Insurance Cartels are below their vax-quotas to turn an acceptable profit-margin, so they're bringing back the hated Mask to put public pressure on the 'Unvaccinated'. Instead of turning against an illegitimate 'government' as he should; the Ameroboob can always be counted on to turn against his neighbor.

As proof of this, just note the number of public venues voluntarily requiring Vax Passports. Small businesses: the supposed backbone of America's economy, have been leading the charge here. These are the same venues which the Revolutionaries callously locked down and turned violent thugs against just a year ago; but where money is concerned, the American of today isn't going to let a little thing like that stand between him and his bottom line.

Expect in the coming months an all-out pogrom against the 'Unvaccinated'. We're about to be turned into an object of public hate like Soviet Kulaks or German Jews were in the 1930s. The Regime already initiated the program of creating a quasi-Secret Police agency: The Vaccine Strike Force, empowered to ignore your privacy and property rights to offer you the chance of joining up or being put on a blacklist. The Vax, like the Mask, is a symbol of submission.

And don't make the mistake of believing that all of this will go away in some electoral 'Red Wave'. Just remember that what the Regime is doing now with compulsory masks and vaxes was made possible by those 'Conservatives' who exploited previous 'crises' to mandate things like drug tests, national age-limits, and sobriety checkpoints. 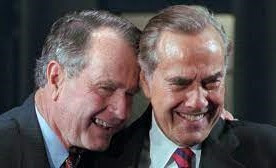 We have to start facing the reality that it's not just our national leaders, but our national character that is corrupt. If there really was a 'Silent Majority' it never would have let things deteriorate to this point. What we have to do is begin unifying within our own communities and breaking our dependence on the Beltway at the personal and communal levels as much as possible. And please don't succumb to any of this stupid 'Red Pill' advice about going with the flow and being an army of one. Interdependence with those whom we trust is going to be more important now than ever before.