Yesterday was a busy day for America's glamorous First Lady. The Annual Christmas Tree lighting took place that evening and she was hostess to a group viewing her amazing decorations at the White House. But earlier in day, she traveled to Lynchburg, Virginia to give a speech at Liberty University on the Opioid Epidemic.

Because the Corporate Media doesn't report anything positive about the Trump Administration, few Americans realize that Mrs. Trump has also been quite active in fighting the Epidemic. In May, she started the Be Best Campaign, one of the goals of which is to establish support networks for children and families affected by the Opioid Crisis. Their especial focus is on fighting Neonatal Abstinence Syndrome---babies who are born with addictions. 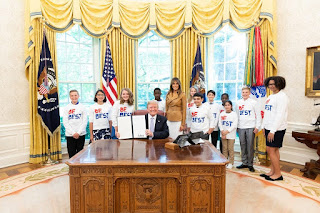 At Liberty University, Mrs. Trump gave a stunning speech. It was noteworthy simply because it was full of heartfelt sentiments, unlike the phony soundbite scripts we were accustomed to hearing from the likes of Hillary Clinton and Michelle Obama. After detailing some of the statistics on Opioid Abuse, Mrs. Trump spoke of her experiences visiting hospices and rehabilitation centers.

"I am here speaking to you in my official capacity as First Lady, but I want you to know I am also here as a mother.  But rather than lecture you about the dangers of drug abuse as most mothers would – and should – I am going to tell you what I have learned in this past year because I believe education and learning is key to making the right decisions on your own behalf.

"I have learned that addiction can begin with something as innocent as an injury – it could be a sports injury, or from some kind of an accident. I have spoken with families and seen many news reports that talk about young athletes or people injured in accidents who became hooked on opioids after being given a prescription for real pain. Tragically, many of those stories end with people who have later transitioned into using heroin and overdosing.  In fact, data from the Department of Health and Human Services shows that in 2016 and 2017, more than 17,000 deaths were attributed to overdosing on commonly prescribed drugs.
"I have learned that many people who become addicted to drugs are too ashamed to ask for help. I have also learned that addiction is a disease. And like any illness, people need and deserve treatment. We must commit to removing the stigma of shame that comes with addiction and helping change public opinion so that people find evidence based treatment before it is too late...
"I believe that as our next generation, you have the potential to not just reduce, but eliminate the statistics I mentioned earlier. I also believe you have the capacity to not think of this in terms of statistics, but to think of this as a human story and an opportunity to save lives. I believe in your unending potential to change our world for the better."
Mrs. Trump was roundly applauded by everyone except for the few Media Hyenas in attendance. Most of the MSM ignored the speech altogether, the full text of which can be read here. I can't help but to remark here that Melania Trump is doing a lot more good for real people in real need than those slatterns running around in disgusting pink hats screaming about how much they hate men.
Now, if young women would like to expend their efforts actually doing something that benefits all of us: why not follow Mrs. Trump's example as she called upon American youth to do? The Be Best Campaign would be a good place start. And there are plenty of volunteer opportunities to help mothers and children in drug recovery throughout the country. That's certainly better too than getting thrown in jail for disrupting Senate Confirmation Hearings. Or better than standing for hours in the hot sun raising money for racketeers like Planned Parenthood.
Who knows? You might even meet your soulmate, because the real men don't hang around Feminist rallies. They're out there fighting the drug epidemic too.
Posted by The Night Wind at 6:39 AM