Last night, the nominal American Head-of-State addressed the U.S. Congress---which formerly served as the legislative branch of our national government. I didn't watch Biden's farrago or the Republican's so-called 'response.' A few fawning headlines prior to the event indicated that the Premier 'president' would speak on a topic of 'turning peril into opportunity.' That certainly fits with the guiding spirit of today's America; where profiting off of panic has become a way of life.

As for the Republicans, hope for that Red Wave in 2022 was greatly buoyed by the announcement that Bruce Jenner has a chance to bring California back into the GOP fold. A Hollywood degenerate who last headed the most dysfunctional family in America; who blew his mind on drugs and decided as a senior citizen that he was born into the wrong gender; who killed people by reckless driving and escaped justice because of his connections---who could better represent Conservative values than that?

The real message that the Junta wished to convey was sent before the speech even started. This morning, secret state police federal agents raided the homes and offices of three of the legitimate President's legal team: Rudolph Giuliani, Joseph DiGenova, and Victoria Toensing. My intuition says that the GOP leadership had nothing to say about that. 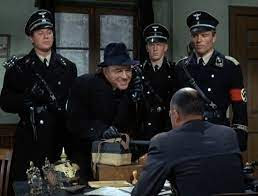 The timing of these raids with the speech---marking 100 days since the Regime seized power---is not a coincidence. Lately they have been relaxing their grip on the collective throat; mostly because doing so is part of their weaponized mass-psychology techniques; and because dictatorships need time to consolidate their power. The politically-motivated attacks this morning was sending the message that the Regime still fully intends to persecute its opposition. I rarely make predictions, but I stand by the belief that the primary short-term goal of the Junta is to create a one-party state; and that the Elections of 2022 will not take place---at least not in any form recognizable as participatory democracy.

We saw a similar message sent in the recent show-trial of Derrick Chauvin. The day that Chauvin was illegally convicted, the Regime announced that the stormtrooper who murdered a pro-Trump protester in cold blood would face no charges. The message sent then, and today, is that political thought and activity would become de facto criminalized. This is all ahead of the upcoming mass-trial of over 300 people who've been rounded up in connection with the pro-Trump protest of last January 6th. That trial has a preliminary date of May 10th; though it hasn't been confirmed. Thanks to our 'conservative' former president George Bush Jr., 'domestic terrorists'---which is what these protesters are accused of being---can be held indefinitely and with limited rights to Due Process.

All of these farces are leading to another attempt to put President Trump on trial; and by extension criminalizing political support for him and his policies. The Left has also not given up its intentions of creating Truth and Reconciliation Hearings. This will mark the end of any meaningful legal dissent in the United States---and all of this can be accomplished well before November 2022.

One of the reasons that I've made and stood by a prediction of this kind is because the warning signs are obvious and the Elites are open about their intentions. But try and explain any of it to the average Ameroboob and you get a blank stare or hoots of laughter. At this point, I think we could have Auschwitz-style labor camps and most prisoners would still argue that this is "the greatest county on God's green earth" and that all we have to do is wait for that next Red Wave at the polls.