MINNEAPOLIS: A STUDY IN STUPIDITY

So, right on cue, with the head of BLM accused of financial misconduct and the Chauvin Show-Trial winding down, the Elites have turned their stormtroopers loose upon the city streets again. The Media found another gentle giant---one of many such cases in a typical city weekend---who was shot and killed by police serving a warrant. And so, by Elite decision, America needs another Summer of Rage to finish off any small and midsize business that's managed to survive the last round of riots, lock-downs, unequal taxation, wealth transfers, etc.

It almost seems like the Elites are working from a playbook of Tried and True Formulas for Distracting Ameroboob Attention. Just like the Entertainment Media has about a dozen scripts that it recycles with different characters and situations, the News/Infotainment Media runs the same narratives with different faces. Basically, it all runs along these lines:

Script 5: Throw in some Climate Change, Virtual Signalling, or Junk Science in between previous scripts; but make them short like infomercials and not full-length dramas.

Just like movies go 2 hours and TV shows for 1, the news cycle seems to run its course and we need a either a new crisis or a new normal based on the formula. And just like television shows routinely have plots without the slightest relation to last week's episode, so the Infotainment Industry can change 'narratives' more or less at will. Only a year ago, for example, police were among "our front-line heroes" and the "settled science" was that masks were useless and that we shouldn't listen to anybody peddling unproven and untested treatments for the Coronavirus. As recently as 2014, nobody thought that being a Satanist, a homosexual deviant, or a pothead was 'cool' and 'trendy'. In 2010, the Tea Party on the Right and the Occupy Movement on the Left were protesting the political and social power of a few moneyed oligarchs; today, the Ameroboob celebrates 'woke' Corporatism and the Great Reset without a second (or even a first) thought. 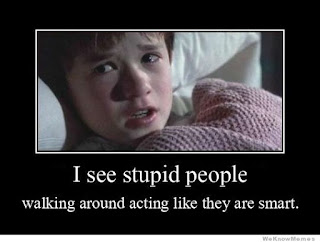 There is a difference between ignorance and stupidity. Ignorance is often just as bad in its consequences, but it is curable. An ignorant person is someone who simply doesn't know any better, often because he's been disinformed by someone in authority: parents, schools, government, media, etc. Racism (the real kind) is a good example. Many of our ancestors believed in it because the "settled science" of the day knew nothing of DNA and taught that character traits were carried in the bloodlines. Thomas Huxley, an early promoter of the Evolutionary Theory, wrote in 1866 in the aftermath of the U.S. Civil War:

"While it may be true that some Negroes are superior to some White men; no one who is cognizant of the facts can seriously believe that the Negro is the equal of---let alone superior to---his White counterparts." Huxley went on to state that Emancipation was socially "an attempt to transform Negroes from well-fed animals to pauperized humans." Many of us today don't realize just how much the global intellectual elite laughed at "the American obsession with universal human rights" back then. Many of us today also forget that, despite the persistent myth of 'systemic racism,' the U.S. was historically at the forefront of abolishing racism. Slavery was never legal in Pennsylvania or Rhode Island. By the time the Constitution was ratified, it was banned in New York, New Jersey, and all of the New England states. None of the Northern States allowed it. California abolished slavery when it became a state in 1849. At its height, only 11 states practiced it, and even in Virginia, Arkansas, and Tennessee many county and local ordinances forbade owning slaves. We haven't been perfect, but we've never been "the most racist and oppressive society in history," as the 'settled science' of today teaches.

Once faced with actual facts, ignorance dissipates and the misguided thinkers become wiser. Stupidity, in contrast, isn't misguided thinking. Stupidity comes from the inability or unwillingness to think in the first place. The new wave of riots is a perfect example of that. The MSM reports that a Black guy gets shot by a White policeman and that means that it's time to run outside and unleash all of your rage upon society. 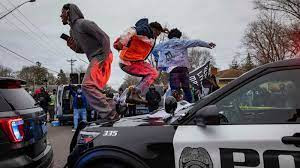 None of these pinheads have the slightest idea why they are outside making fools of themselves. The fact that they don't know---and don't care to know---is what makes them fools in the first place. This is simply a conditioned reflex, like Pavlov's famous experiment where he taught dogs to experience hunger at the ringing of a bell. In at least one case the boobs heard 'black man shot by policeman' and were out rioting, looting, and demanding an end to 'racist policing' before it came out that the police officer involved was himself Black. And, of course, none of these goofballs can explain exactly how all of this mayhem is supposed to end Racial Injustice---even assuming that such a thing actually exists. In the aftermath of all of this will be an equal display of stupidity with other fools kneeling, bowing, apologizing, etc. Trying to reason with such people is practically useless since their minds only react to external stimuli and their thought processes have been atrophied through continual disuse.
When we had a society that actually functioned, there were stupid people around too; but stupidity was socially shamed instead of being celebrated like it is today. People then were encouraged to think. The difference today is that the Elites have weaponized stupidity. Through their vast networks of Big Money, media and academic monopolies, and political influence, they have found that a combination of inculcating narcissistic hubris and learned helplessness in the general populace can create an arrogant self-righteousness which is impervious to truth.
The shylocks in unscrupulous Madison Avenue marketing firms have known for decades the techniques for bypassing rational thought to sell products; and the Media moguls likewise have long understood the profit in dumbing-down a mass audience. In a 1988 etymological study, John and Adele Agelo found the first concept of dumbing-down was "Originated in 1933, the term was movie-business slang, used by screenplay writers, meaning: '[to] revise so as to appeal to those of little education or intelligence'."
Modern psychological warfare has simply combined these principles; adding to them very shallow forms of shock and sensationalism. The marketing angle plays to people's deepest and most instinctive needs, while the dumbing-down plays into the human tendency to seek validation from the herd. The added sensationalist aspect is to threaten that same herd-validation; but only so far as a leader, spokesman, or expert can be produced who offers that sense of security. One can see how, in age of mass-communication, a small group of oligarchs controlling the media can wield an exceptionally dangerous power to any social order.
Contrary to what many Conservatives believe, a laissez-faire approach to media---with Corporate monopolies feeding market demand---is not much of an improvement over outright Government control of the Media. Just ask Bill Gates,  or George Soros,  or Jeff Bezos, or Rupert Murdoch. Deregulation Acts endorsed by the Deep State back in the 1990s and 2000s repealed laws put in after WW2 by political leaders who saw firsthand that Mass Media could become a dangerous weapon in the wrong hands. It's really a moot point since, in today's corporate-controlled political environment , the chances of reviving the Fairness Doctrine, the Telecommunications Act of 1934, or the Anti-Propaganda Act are practically nonexistent. There's always been a debate about how much influence Government vs. Corporate America should have over the Mass Media (today they amount to more or less the same thing); but the power of our Free Press was always based in the integrity of the source. Contrary to what most Liberals believe, what this means is that we need more sources, not fewer.
In terms of social policy, what we really need to do in terms of regaining our national sanity again is to increase competition in the mass-media. We should require media outlets to publish disclaimers as to their ownership and/or major financial contributors. Government should be forbidden to enter into any contractual relationship with any corporation holding media entities. We also must break up the corruption in public education and restrict corporate bribery donations. The chances of these things happening, however, are likewise very remote.
What we can do in the meantime though, is to take measures to protect ourselves. Stay informed, question the official 'narrative.' The Elites are working even as we speak to close that loophole too, with Contact Tracing, Artificial Intelligence, and other so-called 'smart' technologies. Our minds are our best defense, and we're going to need to use them more than ever in the immediate future.