THE CHAUVIN SHOW TRIAL AND THE WAY OF ABRAHAM

With the 'verdict' in Derrick Chauvin's show-trial is expected at any moment, the Ameroboobs are hanging on the edge of their seats, as though they were waiting the results of a TV game-show; even though the verdict---like the election---was decided before the farce even started. If the Elites want to foment more racial unrest, he will be acquitted. If they want to send a message about their new politically-correct administration of 'justice,' he will be found guilty. They may even opt for a hung jury to foment even more chaos and distraction. The fact that Chauvin was tried in the first place was the real miscarriage of justice here. Nothing that happens afterwards has anything to do with 'justice.'

Interesting too is that Minnesota's Liberal wonder-boys, Governor Tim Walz and Mayor Jacob Frey, are calling out the National Guard to keep order. Last year, when President Trump offered the same thing, Walz and Frey angrily spurned the requests. But now that their bosses in the DNC and on Wall Street have OK'd it, they're suddenly ready to defend Starbucks, Amazon Warehouses, Wal-Marts, bank buildings, and other properties which the Elites have interest in protecting. And of course to further intimidate the little people who might be thinking and acting for themselves. 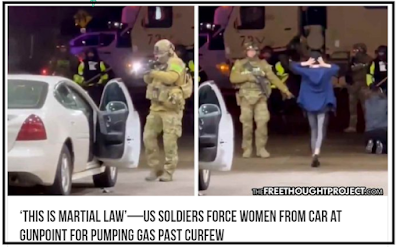 A few years ago, there was growing concern about the lack of critical thinking skills among the American public. Today, it seems like the 'critical' part isn't even relevant and many of us are wondering if any actual thinking goes on among the majority at all. It's not only that we're getting 'new normals' on a regular basis; we're new 'consensuses' that are different from what they were just a few months ago. When the Scam-demic first started, police were praised all throughout official propaganda as among "our front-line heroes" for doing things like breaking up church services and dragging people off buses and beating them for not wearing masks. Now, just a few months later, they are demonized for daring to their jobs and protect human lives. And the fools buy into these shifting narratives as though they were solemn truths.

Considering that thinking---the ability to reason---is what distinguishes man from beast, one would suppose that we exceptional Americans would guard this ability. Unfortunately, it seems like even this basic survival mechanism has become passe, like believing in genders and believing in immortal souls accountable to God. Lacking reason, empathy, or faith, the Elites get what they have long desired---to reduce us from human beings to domesticated animals.

When one reads the various manifestos of gangs like the World Economic Forum and their various sympathetic goon-squads, that attitude is very clear. Like managers of livestock, these Elites want to 'reset' humanity back to the level which---according to the Evolutionists---we were before Civilization began. That won't apply to the Elites themselves, however. They get to remain human---superhuman and godlike in their own imaginations. Sort of like the dawn of Prehistory when humans moved in herds and were ruled over by kings and shamans whom duped our forefathers into bowing to them and worshiping them as gods or divine emissaries. Anyone who laughed at these impostors and tried to to convince others that only the One True God was worthy of adoration and obedience were driven out of the herd. The Biblical story of Abraham is an example of what went on back then (and what the Elites hope to achieve in the future). 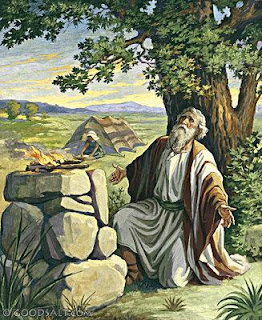 The Elites' plans include abandoning our current cities and corralling us into 'Smart Cities'. These are human ranches where we're tagged and 'contact traced' assigned tasks, told what to eat, where to live, when to reproduce, get our vaccinations, etc. Our population will be controlled, like the State Game departments control sustainable levels of wildlife. We'll have no property, no privacy, and no rights: just like every other member of the herd.

If we chose not to think or reason, and abandon Faith in God and love of one's neighbor; that is our future. The 'Great Reset' is simply the culmination of decades of Marxism, Scientism, Feminism, Political Correctness, Moral Relativism---all of which we designed to 'reset' humanity all the way back to the Stone Age. It is up to us now to be like Abraham and stop running with the herd.

Just a few hours after this article is published, the Chauvin 'verdict' will be announced, and we'll have another staged 'crisis' of some sort raging across the Anglosphere. Don't fall for it. Learn the dynamics, and think for yourself.