EASTER IN THE DYING ANGLOSPHERE

It's Easter again in the Prozac Nation. A year ago, with "two weeks to flatten the curve" and "an expected return to normal by September," Christian Churches---with very few exceptions---slavishly locked their doors in accordance with arbitrary decrees assuming "temporary" emergency powers. Since then, some local dictatorships governments graciously have permitted us little people limited permission to gather for worship again---mostly because our barely-functioning legal system has forced them to. Of course, the Corporate Oligarchs are moving to make certain that Easter celebrations are still discouraged.

Meanwhile, without restrictions or shaming, citizens of places like Red China and even many Moslem countries are celebrating the holiday. 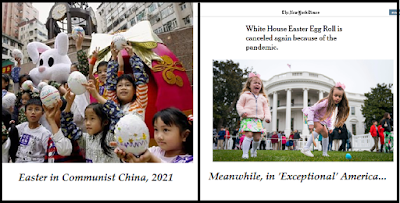 At least we haven't (yet) fallen to the levels of our greatest ally Britain---whose secret police are now literally kicking down church doors. London's Metropolitan Police stormed Christ the King Church on Good Friday after "reports of crowds of people queuing outside." In other words, descendants of the people who gave us the Magna Carta are denouncing their neighbors for attending church now. It should be noted that England is currently proposing legislation granting the State further powers of domestic tyranny, which yesterday resulted in a brutal police suppression of a London demonstration. London's Mayor Sadiq Khan, another Great Reset kook, stated that "We remain in the middle of a global pandemic and we have made great progress in controlling the spread of the virus; we will not allow the selfish actions of a small number of people to put Londoners progress in jeopardy." Remember that this 'great progress' of which Khan speaks is after a year of 'temporary measures' that British 'experts' assured everyone that they had well under control. The only thing being controlled in England right now is the Angloboob population itself.
Some in Britain have condemned the State's actions; but just like here in the U.S. the Left is actually thrilled at the excuse for closing churches. Here's a sampling of some of the brilliant and profound thoughts left by various woke people in comments: 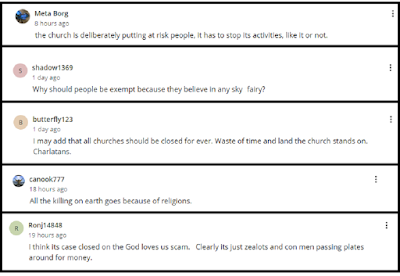 It's important to note these kinds of remarks, because they represent the general underlying attitudes of people who support the repressive policies of the Great Reset crowd---and, by extension, their new order-takers in our own government.

That comment is proof that NPC's are not an exclusively American phenomenon. This mental midget can't even see that the British Government's numbers are mathematically impossible, even when quoting their data. I'm willing to bet that this guy thinks that Dr. Fauci and Bill Gates are actually smart men.

We haven't forgotten about the Mediaeval Plagues. In fact, many of us are wondering why we're not seeing extensive Media footage of all of these supposed dead from COVID-19 anywhere. And of course a smartass atheist is bound to chime in:

This is about like arguing that since the Devil is a created being, God has no right to condemn his actions. It really shows the immaturity of typical Liberal thought; it's reminiscent of a child blaming his parents for what he did wrong by saying, "You made me what I am!" Most Liberals are mentally stuck somewhere before the onset of puberty. If COVID is a man-made virus, then God obviously isn't to blame for it anyway. Nor is God responsible for the evil actions of wicked men who are exploiting the COVID scam.

Here's another NPC. According to his logic, the government is never wrong regardless of how much their policies conflict with their own laws, or even basic human rights.

Another of the woke smartasses here asserts that religion isn't real, so it can't be above the law. What they fail to understand is that God's Laws alone are truly just; thus suppressing religious freedom can't be a basis for just human laws. Their comment is a specimen of the kind of ignorance that Anglosphere Academia has been poisoning people's minds with for the last 3-4 decades.
If most of the English-speaking world's minds weren't so damaged by narcotics and infotainment, they would ask themselves: "Why is this even debatable? These are acts of tyranny, not something that should be tolerated by a free people anywhere."  But we've stopped thinking for ourselves a long time ago, which has enabled ambitious and unprincipled men into positions where they're all too willing to do all of our thinking for us. And, sadly, too many who knew better decided to go along with them and grab a piece of the action for themselves.
When we think back to the first Easter and as we see it in 2021, we see the same social dynamics in play. Christ brought to mankind the Law of God and was met by the hypocritical political elite (the Pharisees); the 'woke' academic elite (the Sadducees); the financial opportunists (the money-changers); the NPCs (who at the Crucifixion "forsook Him and fled"); the Roman guards (who were "just following orders"); and finally the Pontius Pilate, Judas Iscariot, and Unrepentant Thief types who blamed God for their own actions. There's no 'new normal' or anything 'progressive' about any of this. The experts and the pundits of the 1st Century confidently predicted that with Christ's death, the Church would collapse. They've been predicting it ever since.
Just as Christ's victory over death undid the evil plots of those in His own day, so it ultimately will unravel those of ours. The Great Reset will fail and be forgotten just as the Augustan Dynasty was gone and denounced even during the lifetimes of some of the apostles. There are people alive today who saw the Nazi and Soviet Regimes---with their 'science has been settled' schemes---come and go. We must keep our eyes upon the Divine---the Eternal Truth---now and not be misled or intimidated by the force and frauds of mortal men. 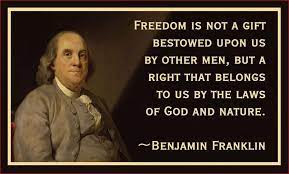