IT'S SPRINGTIME IN THE SECURITY STATE

Today, we're beginning a new month and a new quarter of 2021. We did a little housecleaning on the Blogroll and Links. In this imperfect world, nobody agrees 100% of the time with anybody, but that's not what this was about. I got tired of constantly reading headlines like "Bad News for Biden at Border!" "Psaki pressed on Hunter Tapes!" "Fox News Slams AOC!" "More Evidence of Voter Fraud Uncovered!" and similar things. Not that the Junta shouldn't be criticized; but, frankly, I'm tired of this Conservative Denialism that imagines that it's all politics as usual and that everything bad now will blow over by the next election. Let's do a quick summary of the past 15 months and ask ourselves a question afterward:

1. After a failed Impeachment, the Governors of most U.S. States seized power under a fake 'emergency.' They locked down their political opponents' constituency's source of income and banned Freedom of Association and Assembly. These temporary powers are still in force a year later in many places.

2. The Left created a martyr in George Floyd and the Corporate sponsors behind Antifa and BLM turned them loose on the public. They leveraged this violence to defund and break up police units; again who largely supported their political opposition.

3. They knowingly put persons infected with influenza among Seniors (again who typically support their opposition) in nursing-homes, resulting in the death of thousands.

4. They required sovereign citizens to wear distinctive clothing and restricted travel and services for those who do not comply.

5. They blatantly stole a national and several local elections; shut down any criticism in the media or public forums which challenged the fake results.

6. During this entire time, they have purged schools, the military, businesses, and government of political opposition and this purge is ongoing.

7. They have conducted targeted wealth-transfers to themselves and their supporters while closing political fundraising for opponents.

8. They have ordered a flag besides the national one to be flown at federal buildings.

9. They have taken measures to efface our cultural symbols and delete our history.

10. They are currently working on plans to implement gun control, travel permits, and blatantly discriminatory policies against their opponents' political constituency. They are in the process as well of conducting show-trials against those who oppose them or have committed politically-incorrect thought crimes.

Now, my question is: "What part of the definition of the term 'Revolution' are you not understanding?" Do any of these actions suggest that the current leaders of the Union actually intend to leave office gracefully in 2024 after a fair and transparent election? Do any of these actions suggest that they intend to be bound by the Constitution, or the popular will? Does anybody really believe that Financial Oligarchs who invested in---and fully believe in---the Great Reset Agenda are going to lay down and leave because people want them to?

Conservatives need to screw their eyeballs back into their heads, stop listening to Controlled-Opposition News and get it through their thick skulls that the sociopolitical dynamic has changed radically since 2016. Hunter Biden's tapes don't matter. Hillary Clinton's e-mail's don't matter. Neither does uncovering more evidence of voter fraud 90 days too late. Neither does Joe Biden's obvious mental incapacity nor Kamala Harris' incompetence. They are mere figureheads and have nothing whatsoever to do but take and enforce orders already prepared for them.

The U.S. has gone through exactly the same kind of Color Revolution that the Lords of High Finance have executed against other countries. They are by no means finished either.

It is true that there is hope: a few Senators and Congressmen are standing up to the Junta; and a handful of States (the Dakotas, Florida, Georgia, Texas, Oklahoma, and recently Wisconsin and Kansas), but the stakes are high. Don't imagine for one minute that the Elites are above bringing in foreign troops if they think that they have to. 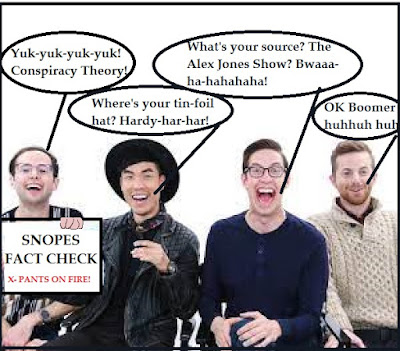 NPC's can chortle over that suggestion all they want to; but the fact is that the Junta can even legally decide to do it if they wish. That great 'Conservative' George Bush Junior---with the complicity of a Republican-controlled Congress---signed a series of laws and executive orders authorizing blanket military seizures of power in case of 'national emergency.' BTW, influenza outbreaks were among the types of 'emergencies' specifically singled out by the RINOs. These same RINOs also lobbied for---and got---the legal means to proscribe American nationals as enemy combatants. The Democrats who supposedly opposed these policies during the earlier 'war on terror' national panic attack have never repealed any of them and fully favor their implementation during the Scam-demic.

What about foreign troops? Well, let's not forget that the U.S. maintains several mutual defense pacts which it has often invoked to justify military interventions abroad---these same treaties can be used to bring international troops to our streets as well. The Elites themselves don't even bother with treaties. They have openly admitted to using foreign proxies in overthrowing governments. The Elites have shipped in foreign nationals to foment regime change in Syria, Ukraine, and elsewhere. The Soros-backed 'migrant caravans' to the U.S. and the flooding of Western Europe with refugees from the Middle East are part of the same techniques. Now think of all of the propaganda coming from the Wall Street-Beltway Axis lately about alleged right-wing 'domestic threats' and ask yourselves if it really can't happen here. 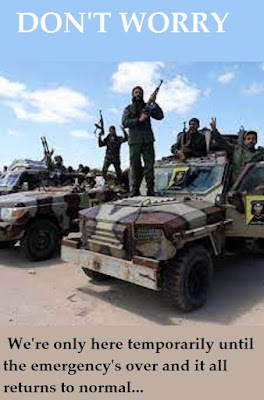 "Oh," the Conservative punditocracy objects, "But the American people would never stand for that!!!" OK, so now that the Junta is working overtime to finish emasculating our own military, defunding the police forces, cutting federal funding to States that don't submit to them, and enacting sweeping gun control---exactly how much standing up are we going to be capable of doing? And I think we've all seen just how willing the average American is to take a stand about much of anything. 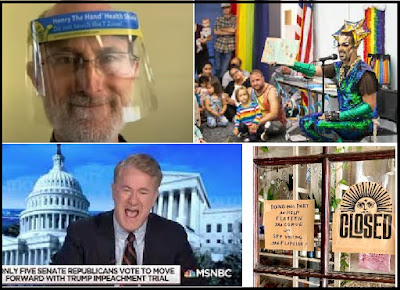 We don't need to give up the fight to restore our Republic, but we need to start facing the fact that throwing up a few prayers in church not backed by any action or waiting for November 2022 and voting Republican is not going to solve anything. The current rulers of the United States are ruthless, unscrupulous, and fanatical. Even their own pundits admit that they would remorselessly kill anyone who gets in their way; and even a few long-time Democrats are expressing concern over the course that the Regime is taking.

What we must do is begin and encourage resistance at the local level. Disengage, Disconnect, Disunite. Support local leaders who are working to make our communities independent of the Junta, Corporate America, and their political puppets. Support county sheriffs who refuse to enforce illegal decrees. Disregard and disobey the Elites' orders whenever possible and encourage others to do so. Cultivate self-sufficiency. If they force you to comply, follow your conscience, but never volunteer. We have to beat the Enemy with hard work and determination, not with rumor, innuendo, and false hopes.